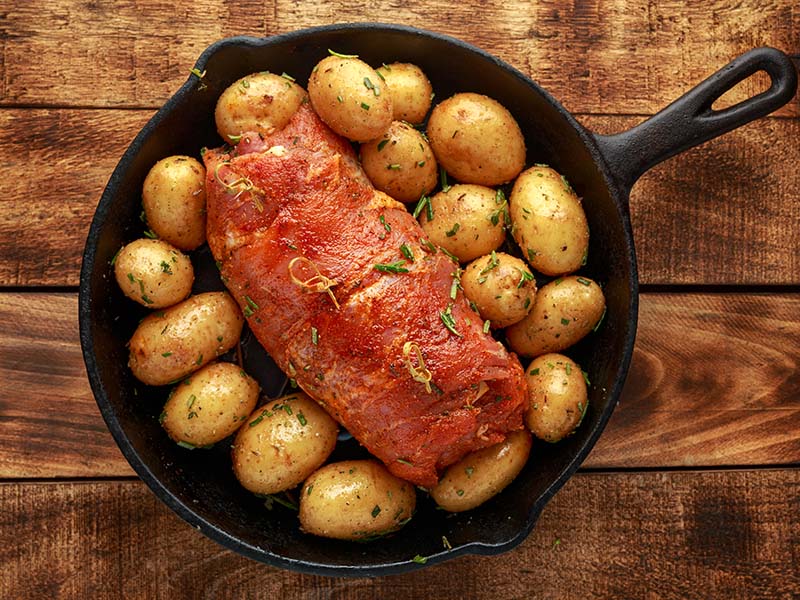 A great dish to use in order to show off your cooking skills for some demanding dinner guests. It is a simply dish but the result is just stunning. Easy to carve and portion up and use as a centre piece on the plate, serve with vegetables and a rich gravy. Don’t be put off by the black pudding it goes brilliantly with this dish, your friends will be surprised with the subtle flavour and will be asking for the recipe.

1. Prepare pork tenderloin by removing any sinew. Slice length ways but only ¾ of the way through the meat. Open the meat and fold open so it is flat on board
2. Using a food processor blend the Fennel seed, Rosemary, Thyme, sea salt and garlic until fine. Remove and put aside but leave a little in processor
3. Add the black pudding and apple in processor and blend together
4. Lay a piece of cling film 30cm long with another over lapping. Place the prosciutto ham on the cling film and make sure they slices slightly over lap. Do this to the length of the Tenderloin
5. Take your black pudding mix and spread over the centre of the Tenderloin and then fold over to form a full piece again
6. Place the Tenderloin with the crack on the bottom on to the prosciutto ham. Take the remainder of the fennel mix and the dijon and rub the top of the meat.
7. Lift the cling film and roll the ham around the pork, pulling the cling film back as it wraps the ham around. The knack is to get the meat nice and tight.
8. Nearly done now, wrap cling film around Pork and twist end until tight. If you roll the meat like a rolling pin you will be able to get it nice and tight. Place in the fridge to chill until ready to cook
9. Warm oven to 200c. Remove the cling film and place meat on trivet, place in oven but after 10 minutes reduce heat to 180 and then cook for a further 20 mins. Make sure the meat is fully cooked through before serving. If probed the temperature of 68/72oc will be show it is cooked

We use cookies on our website to give you the most relevant experience by remembering your preferences and repeat visits. By clicking “Accept All”, you consent to the use of ALL the cookies. However, you may visit "Cookie Settings" to provide a controlled consent.
Cookie SettingsAccept All
Manage consent

This website uses cookies to improve your experience while you navigate through the website. Out of these, the cookies that are categorized as necessary are stored on your browser as they are essential for the working of basic functionalities of the website. We also use third-party cookies that help us analyze and understand how you use this website. These cookies will be stored in your browser only with your consent. You also have the option to opt-out of these cookies. But opting out of some of these cookies may affect your browsing experience.
Necessary Always Enabled
Necessary cookies are absolutely essential for the website to function properly. These cookies ensure basic functionalities and security features of the website, anonymously.
Functional
Functional cookies help to perform certain functionalities like sharing the content of the website on social media platforms, collect feedbacks, and other third-party features.
Performance
Performance cookies are used to understand and analyze the key performance indexes of the website which helps in delivering a better user experience for the visitors.
Analytics
Analytical cookies are used to understand how visitors interact with the website. These cookies help provide information on metrics the number of visitors, bounce rate, traffic source, etc.
Advertisement
Advertisement cookies are used to provide visitors with relevant ads and marketing campaigns. These cookies track visitors across websites and collect information to provide customized ads.
Others
Other uncategorized cookies are those that are being analyzed and have not been classified into a category as yet.
SAVE & ACCEPT